Kraus Motor Co. was trusted for mounting race-quality wheels, brakes, and suspension to Woolie's Road Glide. A Kraus front end with proprietary Öhlins suspension and 30mm cartridge was installed, maintaining the stock neck angle but increasing ride height by 2.25 inches. A swingarm was ordered from Alloy Art and machined to increase clearance and ride height before welding on a custom adjustable mounting point for the Öhlins HD 044 rear shock and installing BellissiMoto oversuspension to further stabilize the rear. Brembo GP4-RX radial calipers were paired with Braketech 320mm discs and a Galespeed front master cylinder for precise and consistent braking. A set of 17-inch Marchesini wheels were adapted to fit and wrapped in Dunlop GP-A Pro tires. The bike now sits with 7.5 inches of ground clearance. 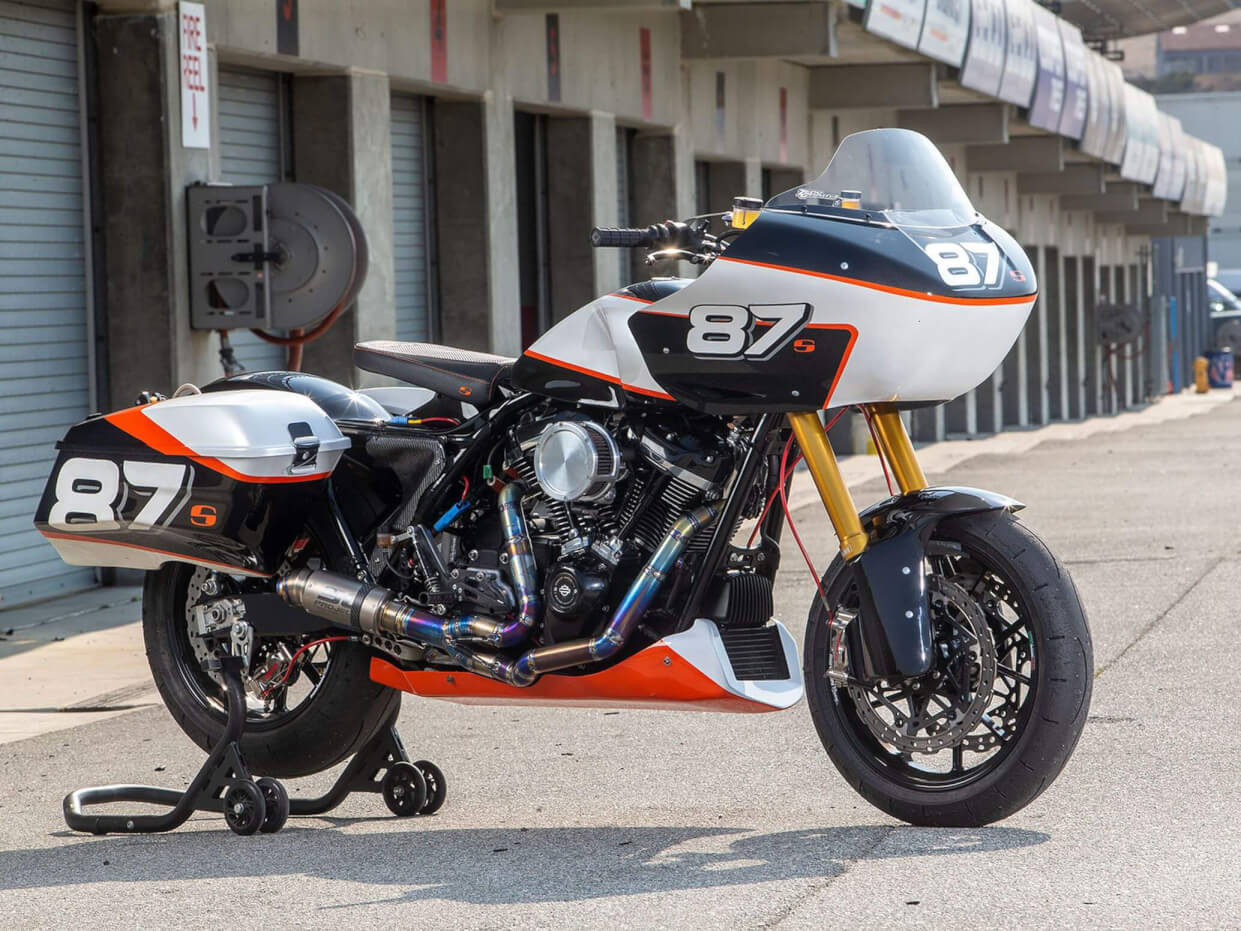 The following is from Morgan Gales, Cycle World. Read the original article  here.

“I’m not a Harley guy,” said the man attempting to build the fastest bagger in the world. “But we’ll see.”

Woolie smirked as he moved some final tools and components out of his old workshop at Deus Ex Machina in Venice, California. His mind was on his next task: building a 2018 Harley-Davidson Road Glide to race at Laguna Seca.

Over the last 12 years, Michael Woolaway, better known as Woolie, has cemented Deus' reputation as one of the most influential custom houses in the US. As the former head builder of the Los Angeles-based motorcycle and clothing shop, Woolie embraces a unique and consistent style. Pulling from his experience in roadracing, his minimal aesthetic often meets maximum functionality. From mold making to hand forming metal to tuning ergonomics, brakes, and suspension, Woolie knows how to make a motorcycle look and “go right,” as he puts it.

“When I was young there was no internet, there were no performance parts,” said Woolaway, sitting in an office chair at the headquarters of Saddlemen, the largest aftermarket seat manufacturer in the States. “So you had to develop a bike. You had to figure out what was wrong and develop the parts. So I learned a lot of different skills over the years. College wasn’t my thing, so I sort of just went into different industries that taught me aspects of fabrication that I wanted to learn to make motorcycles go better.” 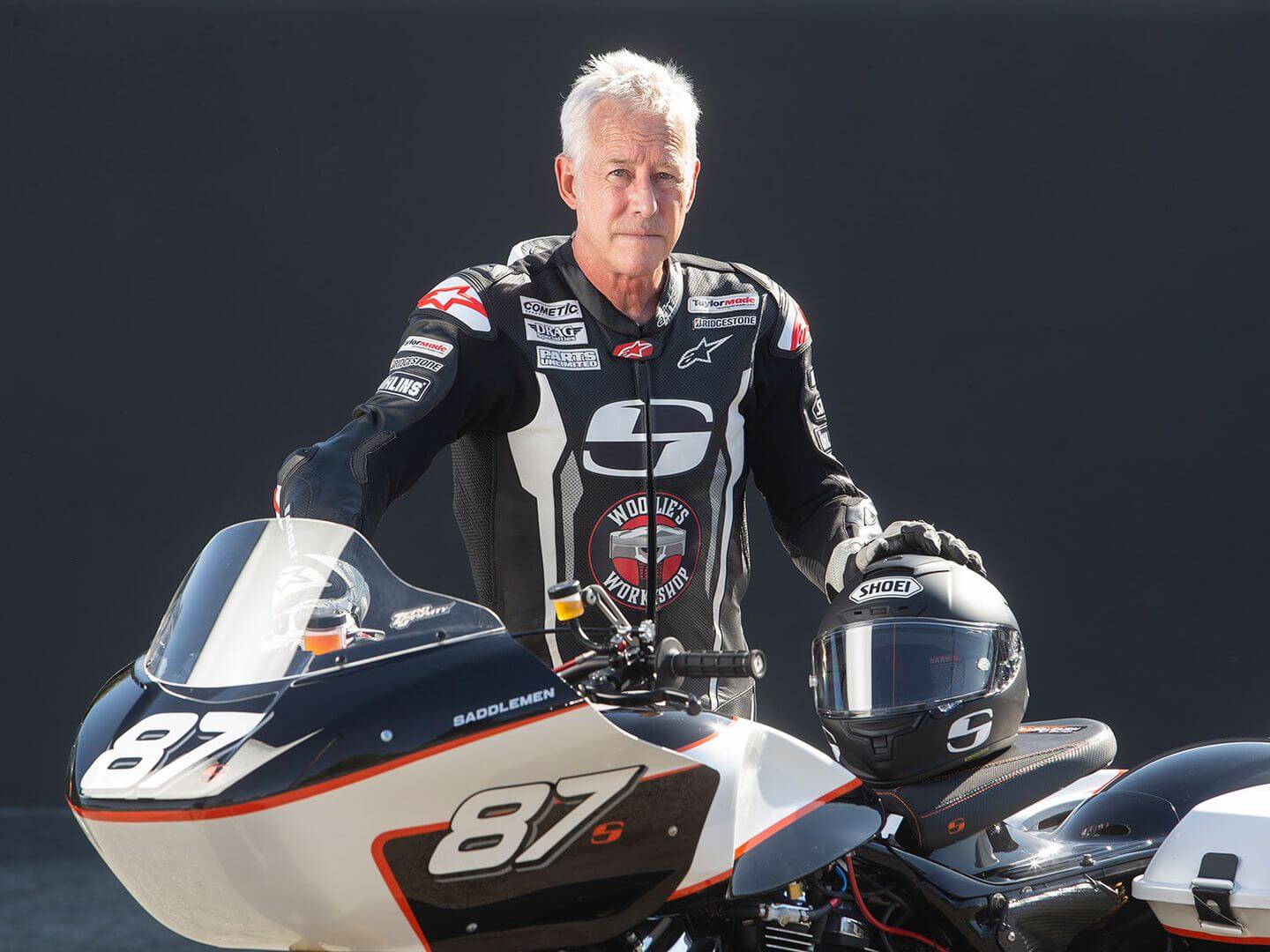 But racing baggers? That’s the absurd and obvious question. As the American V-twin market trended the way of high performance, aftermarket manufacturers started eyeing the racetrack. At first King of the Baggers was a bit more of an exhibition. Fourteen major aftermarket manufacturers would each build their vision of a performance bagger to go around the track at Laguna Seca during Monterey Speed Week. As the race’s main sponsor was Drag Specialties, the majority of components used would be available for purchase through the Drag catalog. Saddlemen hired Woolaway to win the race. With only a few months before the races, teams were assembled and builds were started. Then COVID hit.

The King of the Baggers race was originally scheduled for July of 2020, but as we all know, a global pandemic hit and the world’s events were put on hold. The teams were all ready to bolt on parts and go for a few aggressive parade laps, but when the race was pushed back four months to October, a window of opportunity presented itself. Given the extra time, teams could actually build a full motorcycle, tune, and practice. The exhibition was turning into a race.

And so, at 61 years old, Woolie had a new job: to not only build the fastest bagger on the planet, but to pilot it around one of the most technical and nuanced tracks in the country. Elevation changes at Laguna limit visibility, and Turn 5′s off-camber exit leads to unexpected scrape points—especially on a bagger. Knowledge and experience on this track are incredibly valuable, and Woolie has them.

“I found the line through the Corkscrew,” Woolie said proudly. “The conventional line, you hit the apex and the bottom of the Corkscrew and you stay to the right. But these things are huge, so I’m flicking it in there now, just mowing through the Corkscrew, and I’m heading right off track and then gathering it up. There’s a big patch there, but that may be marbles from the superbikes on race day. We’ll see.” 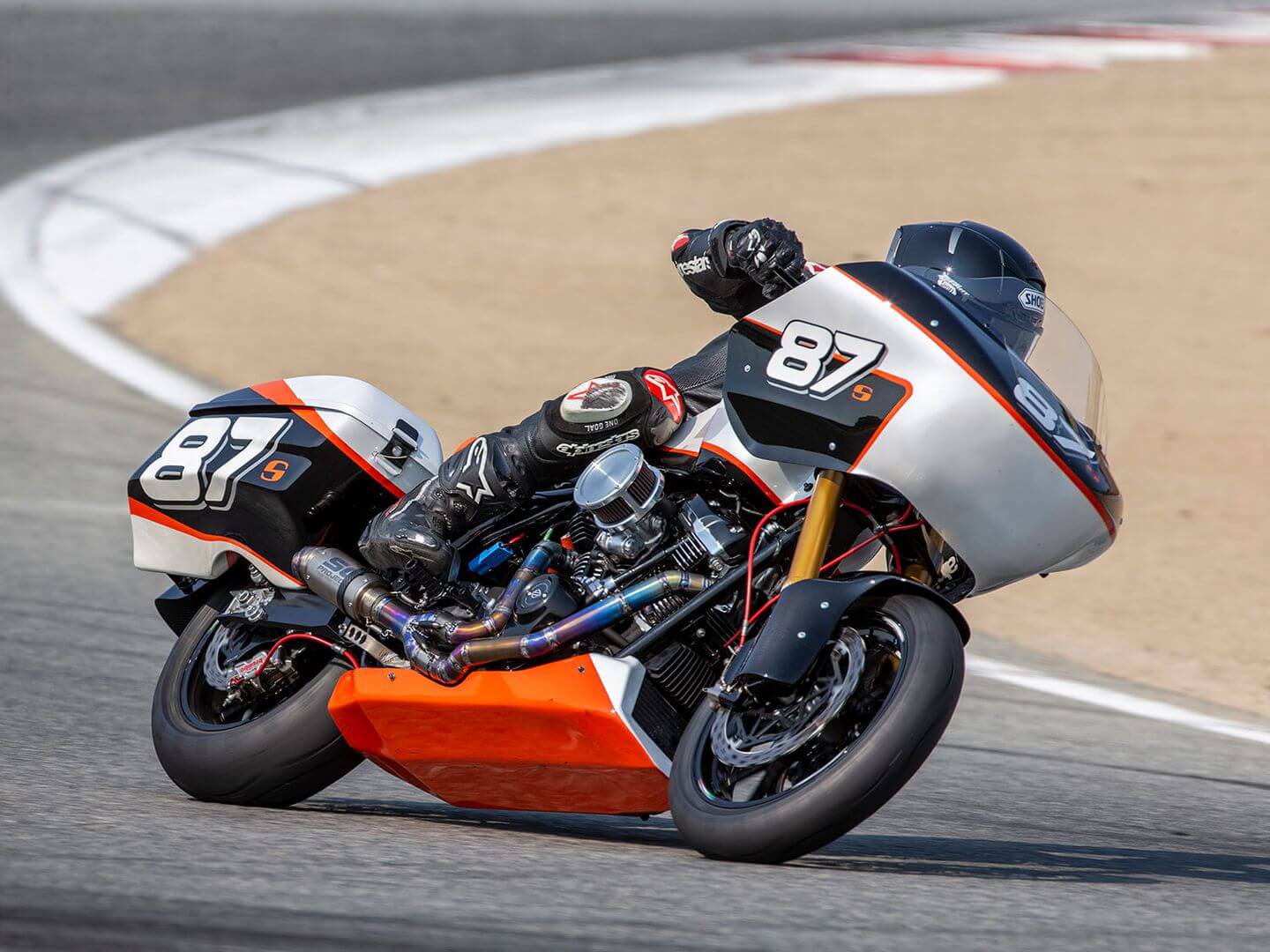 The rules for the race are just vague enough. Each motorcycle must look like a bagger “in principle.” With the help of carbon fiber bodywork specialist Paul Taylor, Woolie hand shaped a Road Glide-style fairing, 3 inches narrower and 4 inches lower than stock, mated to a carbon inner for a combined weight of 3 pounds. Saddlebags were hand shaped with chamfered bottoms to increase lean angle and aerodynamics, each weighing 3 pounds with its lid. The carbon fenders and bellypan add up to 8 pounds, and the entirely carbon gas tank weighs 6.5 pounds dry. With a custom chromoly subframe, 6 pounds taken out of the wiring harness, titanium hardware, and various other weight-saving measures, what was once a 850-pound Road Glide will pull up to the starting line on October 25 weighing 535 pounds with 61 degrees of available lean angle.

Having little experience with a Milwaukee-Eight engine, Woolie reached out to the specialists in the category. A cylinder kit from Suburban Speed Shop increased displacement from 107 to 126ci. Heads were ported, polished, and decked by Branch & O’Keefe. A Feuling Parts Race Series Camchest Kit was installed, including a higher-flowing oil system and a 538 cam specifically designed to work with 124ci and larger Milwaukee-Eights. A Horsepower Inc. 62mm throttle body pushes 8.7 grams of fuel per second with a Feuling Parts intake and handmade exhaust system. Assembly and final tuning, the only pieces of this puzzle you can’t buy online, took place at Bennett’s Performance in Long Beach, California. In 2018, a Road Glide Ultra 107 produced 78.27 hp and 101.66 pound-feet of torque on the Cycle World dyno. Woolie’s bike now produces almost 150 of each.

For mounting race-quality wheels, brakes, and suspension to the Road Glide, Woolie turned to expert Satya Kraus. A Kraus front end with proprietary Öhlins suspension and 30mm cartridge was installed, maintaining the stock neck angle but increasing ride height by 2.25 inches. A swingarm was ordered from Alloy Art and machined to increase clearance and ride height before welding on a custom adjustable mounting point for the Öhlins HD 044 rear shock and installing BellissiMoto oversuspension to further stabilize the rear. Brembo GP4-RX radial calipers were paired with Braketech 320mm discs and a Galespeed front master cylinder for precise and consistent braking. A set of 17-inch Marchesini wheels were adapted to fit and wrapped in Dunlop GP-A Pro tires. The bike now sits with 7.5 inches of ground clearance. 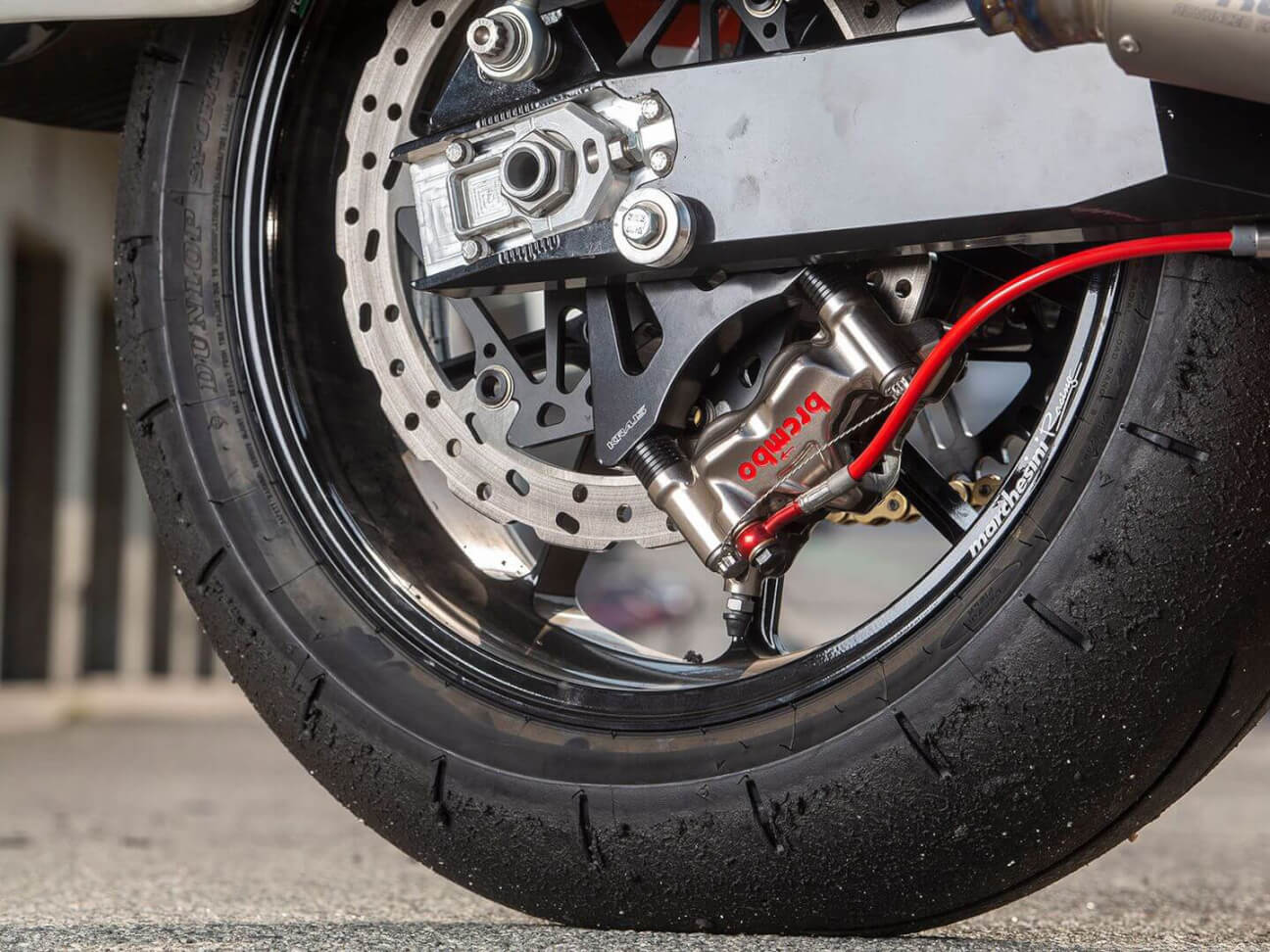 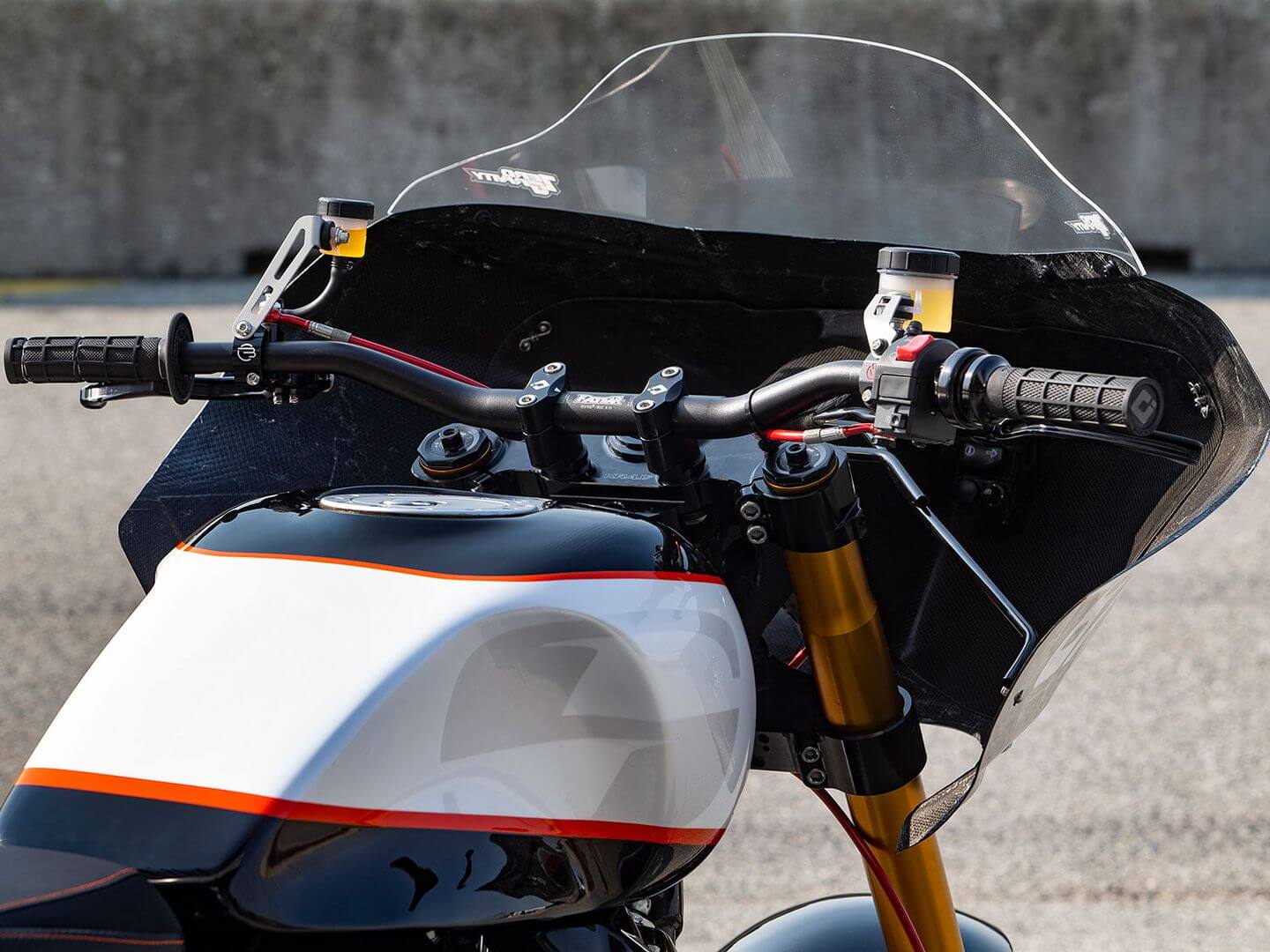 Finally, rearset foot controls and Renthal Doug Henry low handlebars were mounted. A custom carbon baseplate for the concept Saddlemen Racing seat puts Woolie right where he wants to be. The carbon is painted. The stance is set. He is practiced and the bike is tuned. But this is an unprecedented race and there are many unknowns.

The new spectacle of racing baggers is polarizing. These bikes were not meant to be ridden here, like this, but pushing the limits will lead to growth in the category. Yes, it looks to be terribly entertaining, but the real long-term benefit will be the trickle-down of race-proven parts into the V-twin market. When production bikes go racing, the consumer wins. Better, faster, and more reliable products result from competition, testing, and feedback. Many of the riders are using essentially the same parts: Kraus kits, Feuling Parts kits, Saddlemen’s carbon work and seats. They’re almost all street-legal bolt-ons.

As baggers head to the starting line, who knows where the finish line will be? If King of the Baggers continues, the future of American touring bikes may be more carbon than chrome. As Woolie puts it: “We’ll see.” 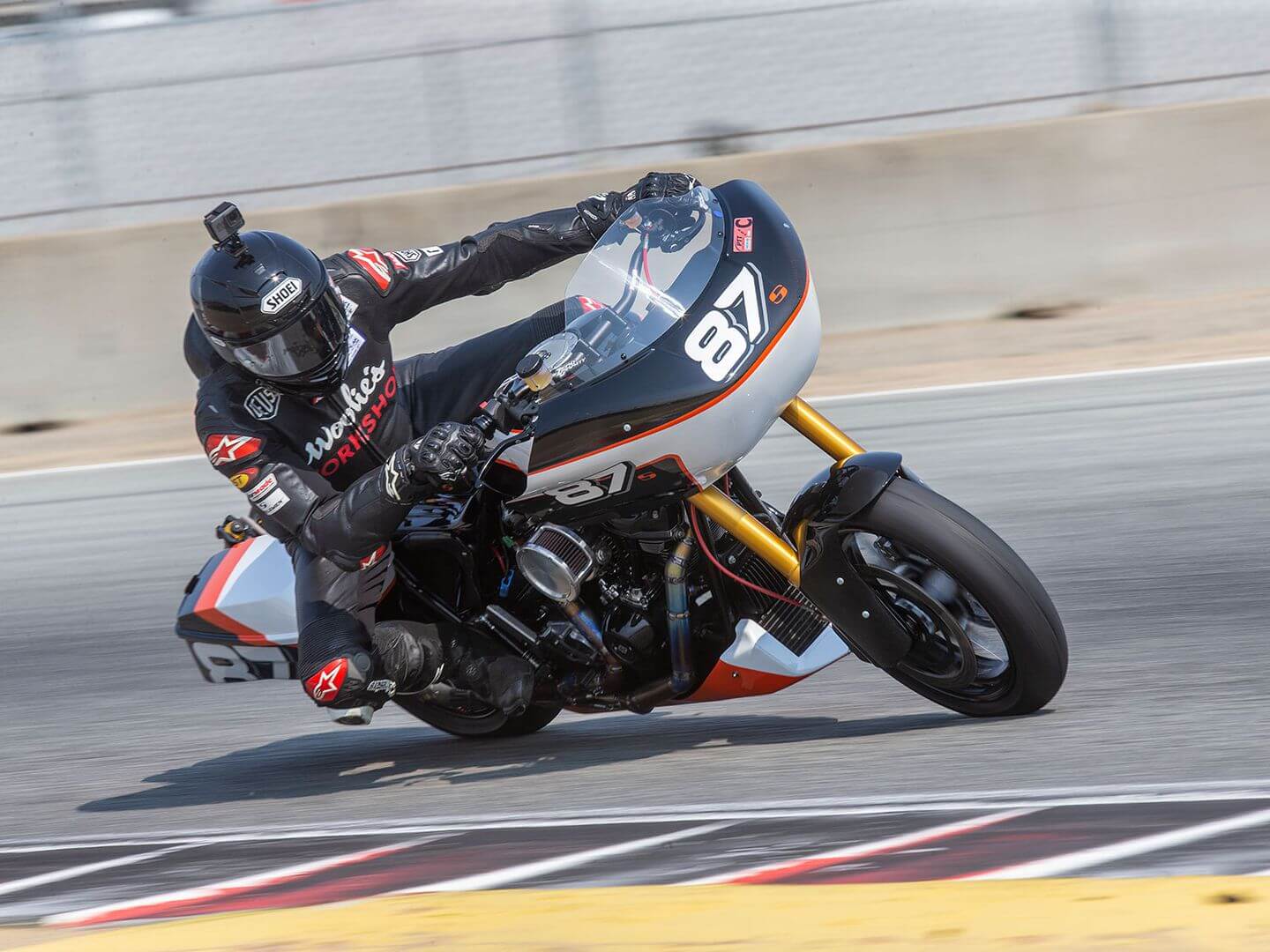 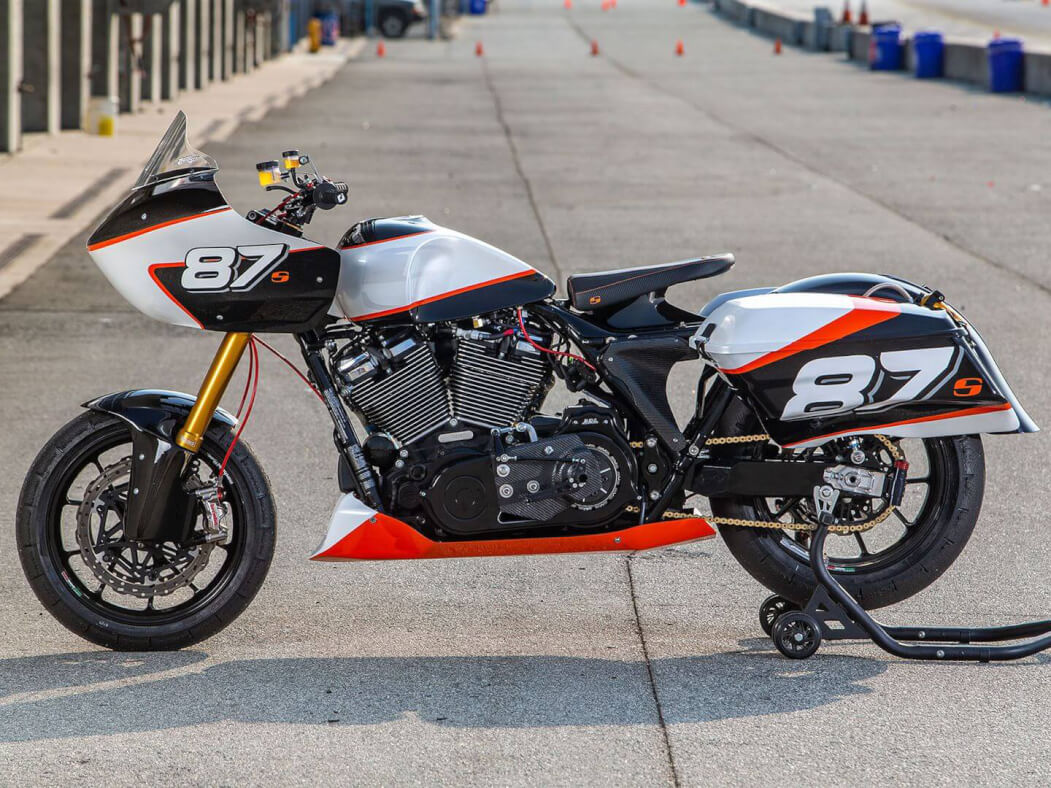 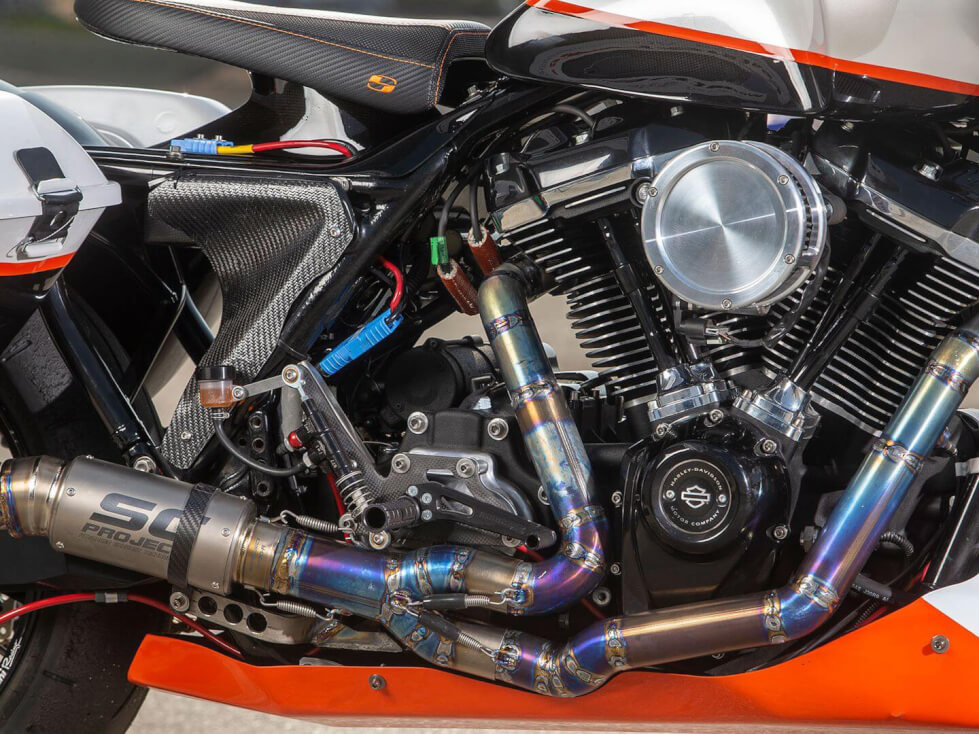 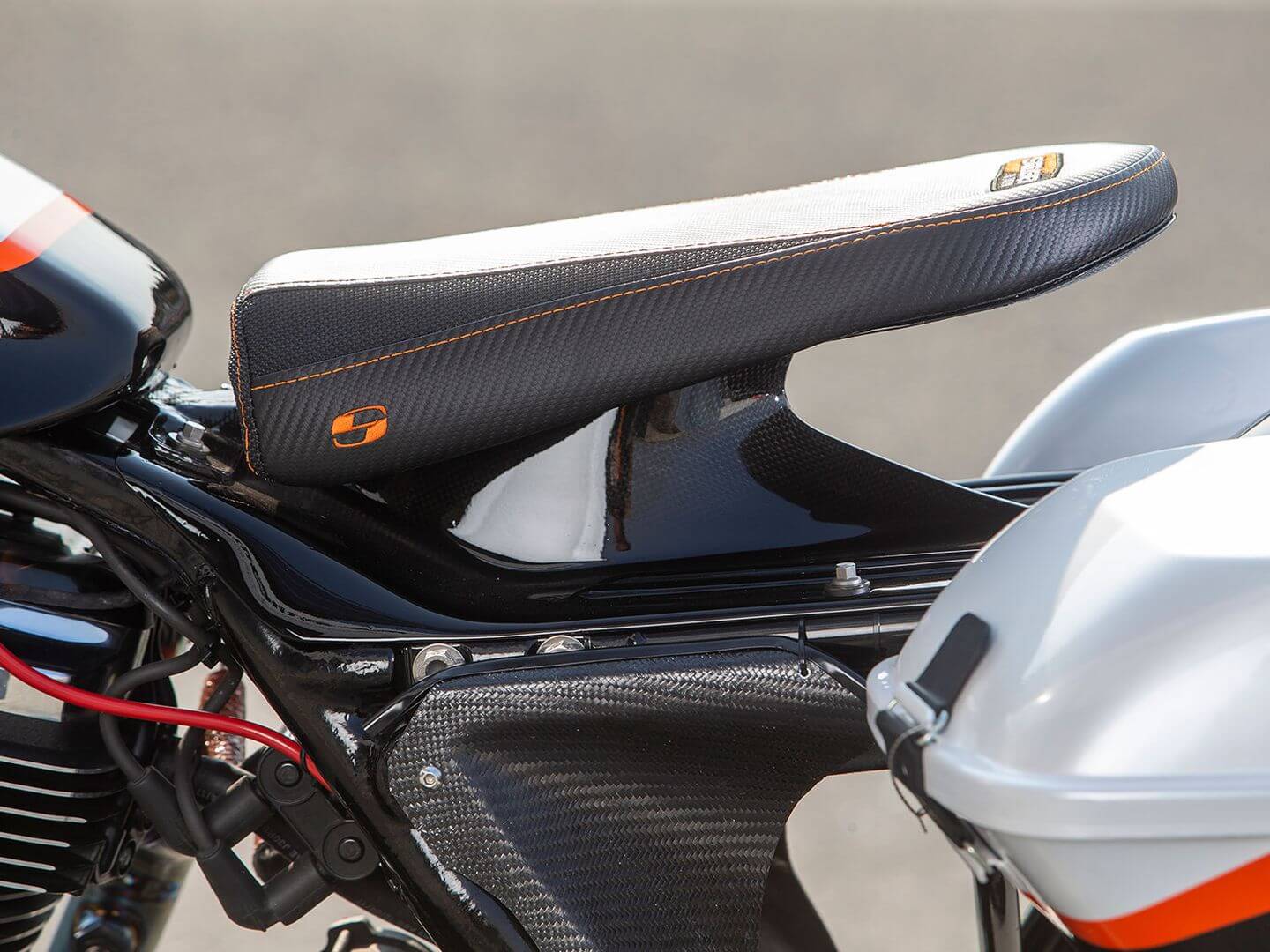 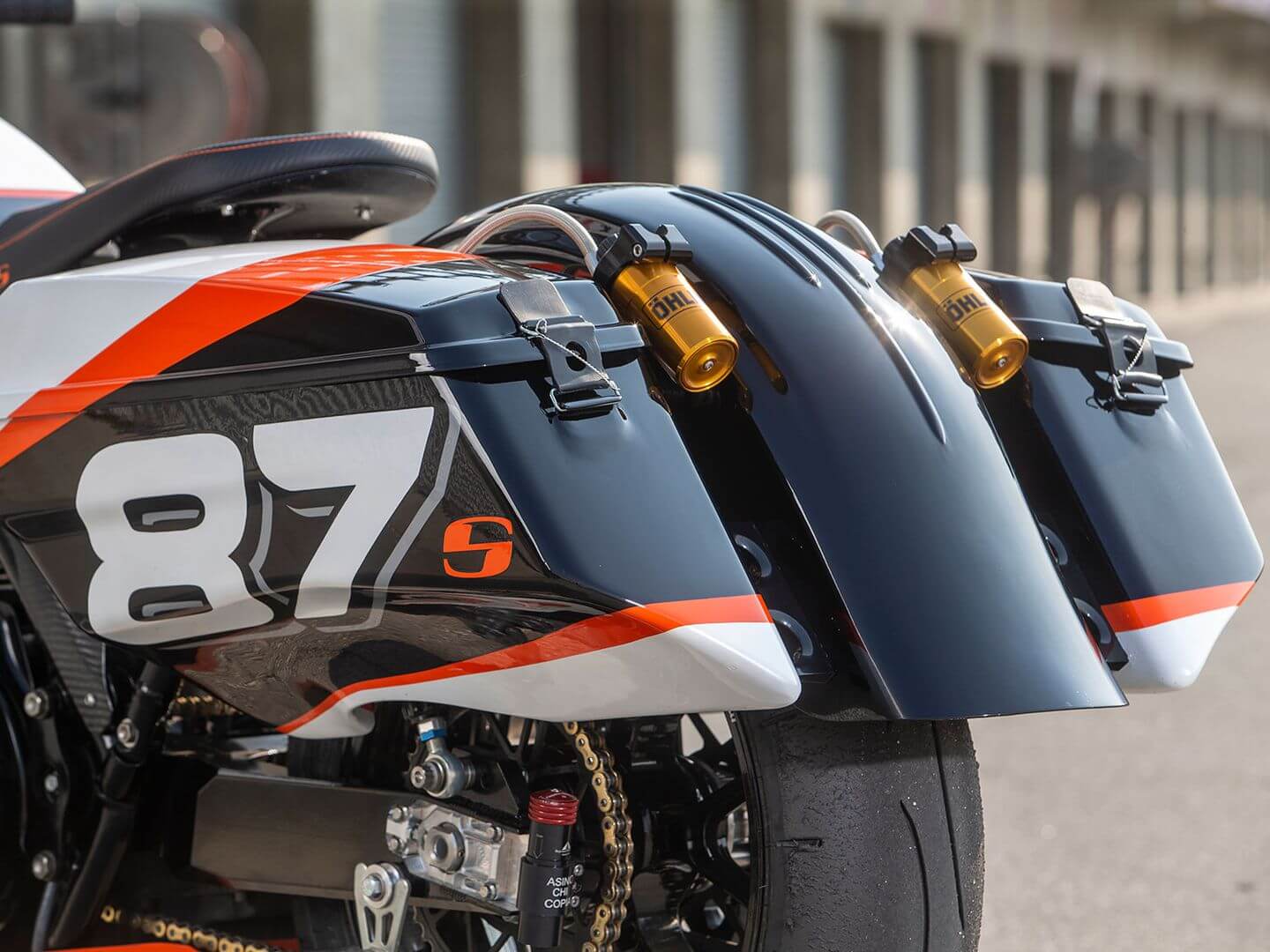 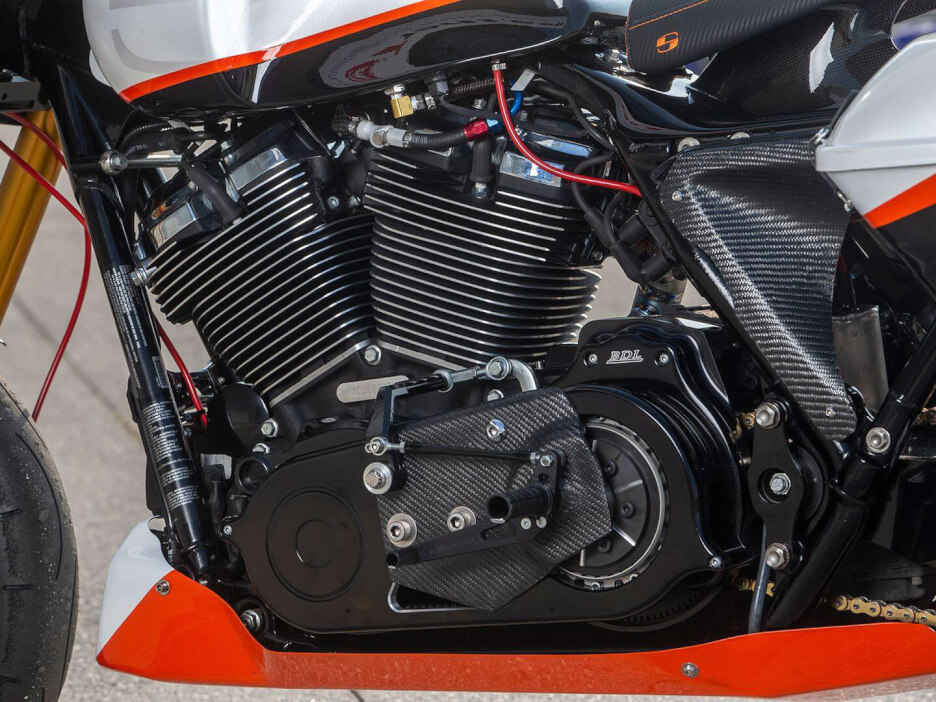 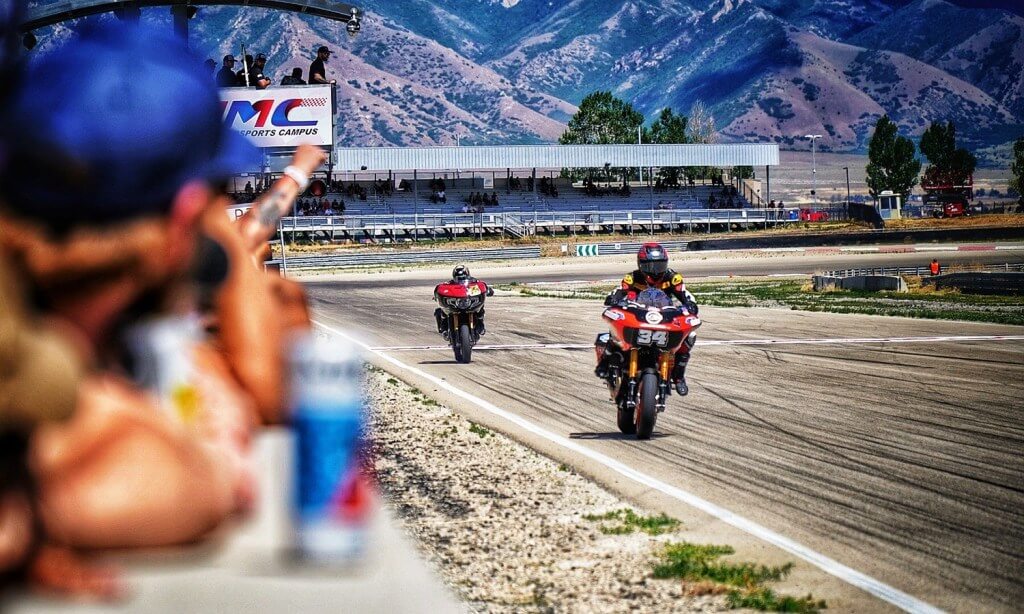 The overwhelming success of the King Of The Bagger roadracing series has sparked the formation of a rival series called the Bagger Racing League. The BRL’s inaugural event took place last weekend at the Utah Motorsports Campus, in Erda, UT. The main event is the Premier Bagger class, where veteran racer Michael Barnes, astride his Harley-Davidson Road Glide, dueled with KOTB race-winner Tyler O’Hara and his Indian Challenger, beating him to the checkered flag by less than a half second.
Read More
HARLEY-DAVIDSON® FACTORY RACING TEAM SUPPORTED BY KRAUS MOTO Kraus Moto is honored to be trusted with the performance needs for the Harley-Davidson Road Glide® Special powered by a race-modified Screamin’ Eagle® Milwaukee-Eight 131 Performance Crate Engine in the 2021 MotoAmerica King of the Baggers Championship.
Read More
VANCE & HINES TAKE 2ND IN THE "KING OF THE BAGGERS" RACE AT LAGUNA SECA 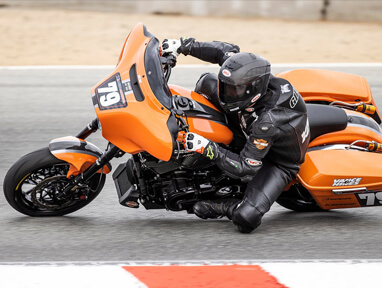 The highly anticipated Drag Specialties King of the Baggers Invitational reached its conclusion on Saturday at Laguna Seca, and the race absolutely lived up to its expectations.
Read More